This performance is intense, which had won 2 awards in 2019.

Summary of this show 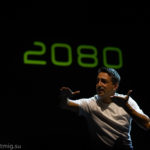 The year is 2080, the era of the medical technology revolution which everyone must have a microchip implanted in the arm. It gives the possibility of solving any problem by using a tactile microcomputer on the arm. Even a visit to the doctor is optional. Is it hurting somewhere?
No problem! Sign language no longer exists because there are no more deaf people! 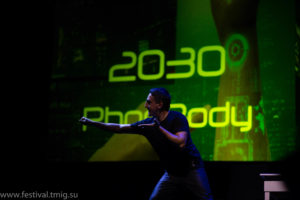 One day, an unknown fugitive appears, chased by the police who try to catch him. But he misses being caught. He then discovers in his belongings that he had lost in his escape some old equipment such as DVD, USB key, books. The scientific police who followed him closely, investigate these strange objects related to deafness.

Presentation of the show

My experience in computer science, especially the evolution of technology which continues its mad race without anyone being able to stop it, led me to write about performance.
For having lived for a long time in associations and campaigning for the Deaf community, the impression that we all run towards failure, crushed by the power of lobbies have encouraged me to create this play.
Creating this science fiction story, from my own vision, will surely make you think.
‘’Never letting go’’ is my motto and allow me to bring into science fiction and the future the story of the Deaf as lived by so many generations!